Due to cooler weather and heavy winds, a large number of sea turtles stranded on the east coast of Florida in early March. These turtles were brought to various sea turtle rehabilitation centers in Florida. Gumbo Limbo received eight turtles that were found washed ashore and extremely lethargic with heavy loads of encrusting barnacles on their shell. 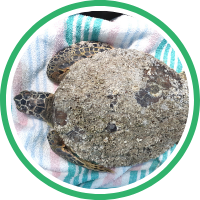