Wormhole was rescued from the Deerfield Beach International Fishing Pier after being hooked by a fisherman for the fourth time! During this fourth stranding, Wormhole was hooked at the same pier in the mouth and flipper and had fishing line entangled around the neck. Previously, a hook had been removed from her jaw and Wormhole made a full recovery. After being released from Red Reef Park, Wormhole was hooked again for the second time at the same pier and swallowed the fish hook, requiring surgery.  Wormhole was encountered a third time at the Deerfield Pier when she was released after the fishermen removed the hook and we were able to identify her from tag numbers.  After this most recent encounter at the pier, Wormhole will likely be returned to sea further away from the pier. Read all about our research on turtles that get hooked on piers repeatedly in the July 2020 issue of Hammock Happenings. 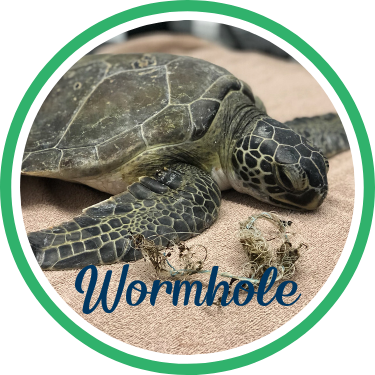 Wormhole was outfitted with a satellite transmitter prior to release. Follow along with Wormhole's journey!