Universe was rescued from Jupiter Island, FL after a boat strike injury. After arriving at Gumbo Limbo Nature Center, it was discovered that she was carrying eggs. She laid her eggs and they were buried in a nest offsite to give them the chance to hatch. She has recovered and was released at Coral Cove Park, Tequesta, FL. 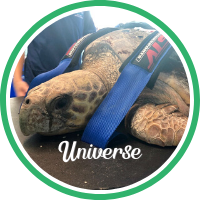