Jak was originally rescued from the Deerfield Beach International Pier in 2017 after being hooked by a fisherman. After undergoing surgery to remove the hook, Jak was released in Boca Raton, FL. Since then, Jak has since been captured three more times at the Deerfield Pier with fishing hook interactions. Each time, the hooks were successfully removed. When healthy, Jak will now be released two hours north of the pier near abundant seagrass habitat in hopes that he will stay away from fishing piers! 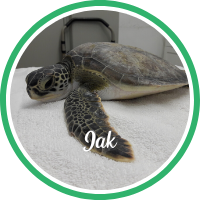 Jak was outfitted with a satellite transmitter prior to release. Follow along with Jak's journey!