Wormhole was rescued from the Deerfield Beach International Fishing Pier after being hooked by a fisherman. The hook was removed and Wormhole made a full recovery. After being released from Red Reef Park, Wormhole was hooked again at the same pier and swallowed the fish hook. He underwent a procedure to remove the fish hook. He has made a full recovery and was released at Spanish River Park, FL. 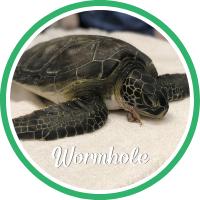