Titan was hooked by a fisherman off the Deerfield Beach International Fishing Pier in her front left flipper. The hook was removed prior to her arrival at Gumbo Limbo Nature Center. The wound recovered, and Titan was released from Spanish River Park with an acoustic transmitter. Titan was then rescued again from the Deerfield Beach International Fishing Pier after being hooked a second, third, and fourth time, ultimately being released from Round Island Park in Indian River County, FL. 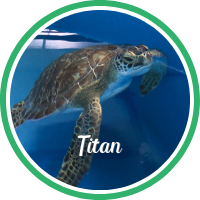