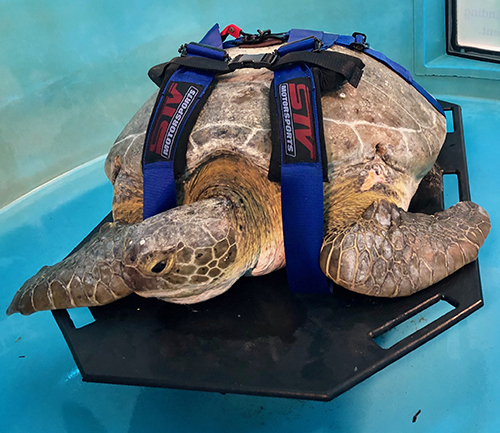 Every nesting season, large adult sea turtles migrate long distances after leaving their foraging grounds to mate in nearshore environments; coincidentally, where humans often recreate.  It’s common to see large mating turtles close to shore, leaving them vulnerable to being hit by watercraft such as boats.  Gumbo Limbo Nature Center’s Rehabilitation Facility admitted two adult female sea turtles this summer with severe boat strike injuries.  Radiographs (x-rays) revealed that both turtles were gravid, meaning they were carrying eggs.  Sadly, both of these turtles suffered from injuries to their carapaces (shells), which severed their spinal cords, leaving them with partial or temporary paralysis to their rear flippers.  Luckily, our skilled team was able to treat these patients; but the injuries required several months of care to heal.

Gravid female turtles admitted to rehabilitation centers have been known to have difficulties dropping their eggs.  This can be because of their injuries or from not being on a beach to carry out their natural nesting behavior.  For our rehabilitation team to properly care for these turtles, we knew they would need to help them release their eggs.  Egg-bound is a condition that occurs in animals, such as reptiles or birds, when an egg takes longer than usual to pass out of the reproductive tract.  This can be fatal if not properly managed.

So how did we manage Gumbo’s first sea turtle labor & delivery ward you ask?

First, we created a calming environment by covering their viewing windows in their tanks to give them privacy.  Then, we consulted with our team and the Florida Fish and Wildlife Conservation Commission (FWC) and came up with an induction plan to use Oxytocin; a drug commonly used in mammals to induce labor.  We drained their tanks during Oxytocin administrations so they could sit in a dry and quiet space (kind of like a dark, calm night on the beach).  Lastly, we elevated them using a large tire so that their eggs could drop with gravity, like they would into their deep and sandy egg chamber on the beach.  As soon as the medication started working, both females began exhibiting normal nesting behaviors and calmed right into a trance, just like the females we encounter nesting on the beach.  These beautiful mommas laid multiple eggs after each induction session and after several days, both females successfully laid all their eggs.

What did we do with the eggs?

Once the eggs were collected, FWC protocol stated that we bury the eggs on the beach in a hand-dug egg chamber, marked with flagging tape, just like we mark all sea turtle nests.  Unfortunately (but not unexpectedly), the nests were unsuccessful, and the eggs did not produce any hatchlings.  There has never been a documented hatch out from any gravid female from a rehabilitation setting (but it was worth a try).

After a few short months of rehabilitation, both turtles were deemed healthy and ready for release!  The time spent here in their recovery tanks miraculously allowed their peripheral nerves to heal and they both regained feeling and motor control in their rear limbs.  We feel that both turtles will be able to successfully nest once again!

Sea turtles are resilient creatures that follow their instincts and have been around since the dinosaurs, but we must remember that they share their ocean home with us.  We urge all boaters to follow the boating safety laws and to use caution especially in nearshore and intracoastal waterways. 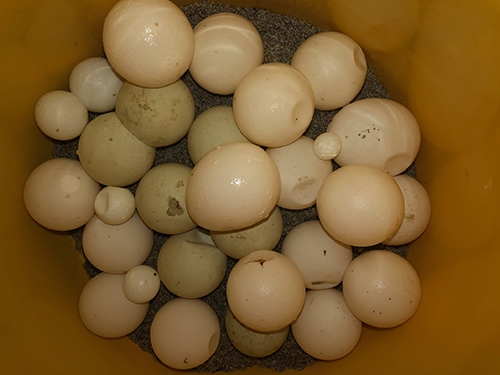 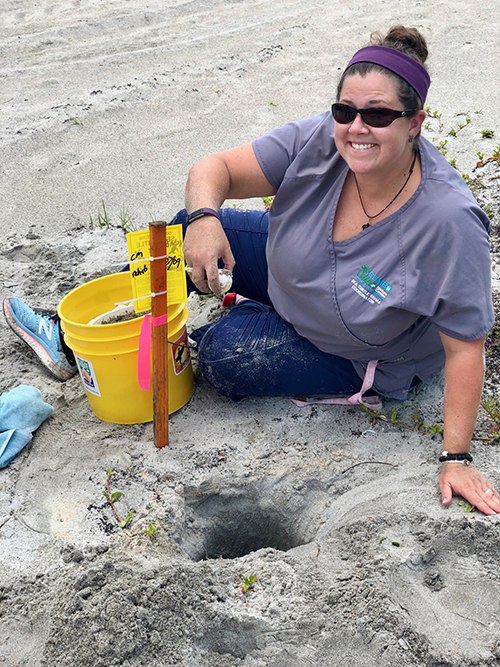