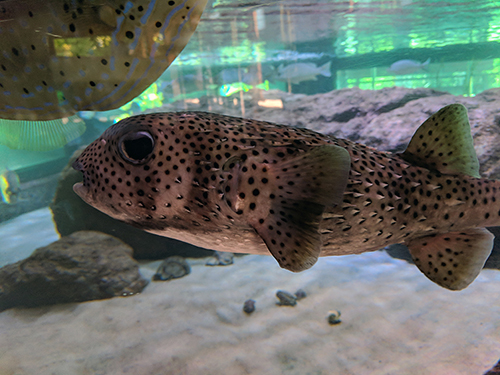 Here at Gumbo Limbo Nature Center, we work hard to make sure all of our animals get the best care possible.  Unfortunately, our animals cannot tell us if they are not feeling well so we take the time to observe each one individually.  We look for behavioral changes or for anything out of the ordinary, from refusing food, to observing a new wound, to seeing an animal repeatedly scratch themselves in the sand.

Earlier this summer our resident porcupinefish (and Facebook star), Kirby, began staying in only a small section of the aquarium he calls home.  He went from exploring and swimming in the entire aquarium to staying in the same place all the time and stopped interacting with the volunteers and aquarists.  A few days later Kirby stopped eating and we knew it was time to take action.  Kirby was moved off display and placed on preventative antibiotics; however, no changes were noted.  Several other diagnostic tests did not produce any results.  We consulted with the sea turtle rehabilitation team and they suggested taking a peek inside with a radiograph (x-ray).  We set up the machine in the treatment room and very quickly realized Kirby’s problem.  At some point in his life before Gumbo Limbo, Kirby swallowed a fishing hook!

Kirby was originally captured from the wild but had been at Gumbo Limbo for over a year with no problems.  Further testing (and a CT scan) revealed that the hook was in Kirby’s lower intestines.  We knew that to get him healthy, we needed to remove the hook.  The aquarium team once again turned to our sea turtle rehabilitation colleagues including Dr. Maria Chadam, Gumbo Limbo’s skilled sea turtle veterinarian, for advice as they handle sea turtles with fishing hooks with regularity.  Together, a plan was drawn up to perform hook removal surgery on Kirby to give him the best shot at a normal healthy and long life at Gumbo Limbo.

After a planning and preparation period, it was surgery day.  This fish surgery was a first for Dr. Chadam as well as for our aquarium team.  Kirby was kept damp with seawater soaked sterile towels, and we made sure he could breathe by inserting a small hose directly into his mouth to pump oxygen filled water over his gills.  We added a sedative to the water as well to keep Kirby from moving during the procedure.  Dr. Chadam located and removed the hook from the intestine.  Four layers of sutures were used to close him up and make sure that everything was back in the right place, inside and out!  Surgery took just over one hour, and Kirby made a quick recovery from anesthesia.

After surgery, Kirby was put in an off-display aquarium.  We continued with antibiotic injections and baths to make sure there were no complications.  Kirby started to eat again and quickly started behaving like his old self.  We made another startling discovery after we found small gelatinous jellybean like objects on the bottom of the tank two days in a row.  The fish we had thought to be a HE, is actually a SHE!  Our beloved Kirby had produced a few eggs despite not feeling well, not eating, receiving antibiotics, undergoing surgery, and everything that had happened to her!  A true sign of the great health she was in before her amazing journey started.

Kirby now resides in our Tropical Coral Reef Aquarium and if you look closely, you can see the small incision scar in her belly.  She continues to grow and eat just like we would expect from a normal porcupinefish.  I hope her story serves to inspire everyone that you can overcome anything and helps everyone understand the highest level of care and teamwork that takes place here at Gumbo Limbo Nature Center. 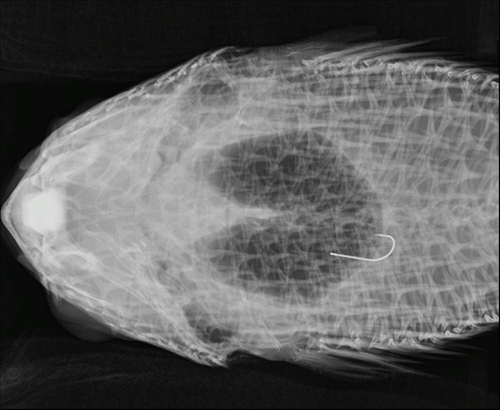