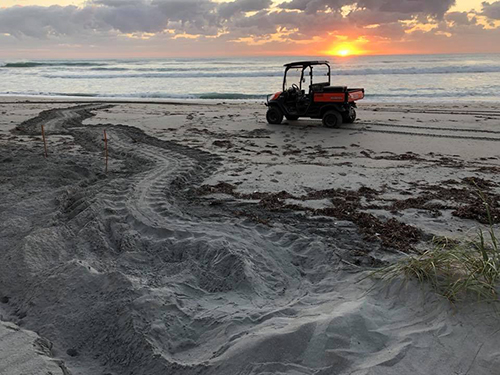 This year, Boca Raton beaches saw a remarkably busy sea turtle nesting season in which two record highs were broken!  We recorded 392 green sea turtle nests this season compared to the previous record of 331 nests in 2013.  We also recorded 913 loggerhead nests and 18 leatherback nests.  The overall total nest count was 1323 nests, which shatters the old record of 1178, also in 2013!  Needless to say, our turtle conservation crew worked long hours on the beach in uncharacteristically hot weather!  Some days we were on the beach up to six continuous hours in temperatures above 95 degrees.  All three species of sea turtle had higher than average nest numbers, which is a hopeful sign in otherwise discouraging environmental conditions.  Another positive occurrence was the return of afternoon thunderstorms which kept the beach sand cooler and damp.  As a result, the hatch success, or percentage of eggs on the beach that hatched, was 80% this year.  This is very close to what used to be a normal hatch success.  In 2016 was saw a very low hatch success of 42% for all species, which means fewer young sea turtles were making it to the ocean.

Unfortunately, we continued to experience higher than average predations by gray foxes and raccoons predominantly in Red Reef Park and just north.  Also, for the first time in a decade, the raccoons were predating nests in South Beach Park.  One way we can help decrease predation on sea turtle nests is to encourage people to stop feeding wild animals.  When raccoons and foxes find extra food, their populations explode, and we lose many more sea turtle nests in that area.  We continue to use hot pepper powder for predator control, but when the predator population explodes, the powder is less effective as several “fresh” predators are available to dig a nest after the first few clear the pepper away.  In areas where the foxes and raccoons are not fed, we have very few predations; one such area is south of the Boca Raton inlet where only one nest was recorded as predated by crows.

We were all fortunate that Hurricane Dorian did not impact Florida as badly as it could have.  The beach actually gained more sand from the storm instead of the usual erosion that normally accompanies a storm event.  As a result, we lost fewer nests to erosion than expected.  Before the storm we had about 450 nests on the beach and more than half of the loggerhead nests had already hatched.  Following the storm, we lost approximately 70 actively incubating nests, less than seen in previous years where we have nothing more than a tropical storm.  Fortunately, green sea turtles nest later in the season, and generally lay their nests close to the dunes.  As a result, many of the green nests survived the storm without even getting wet!  We hope to have an equally (if not more) successful in 2020! 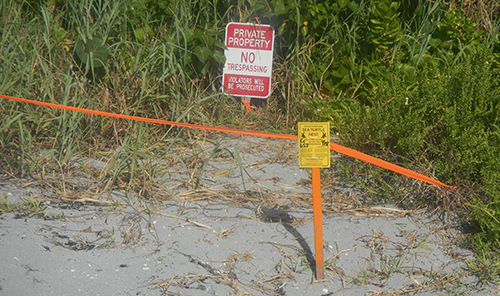 A marked sea turtle nest in a dune.