All About Our Sea Turtle Hatchlings 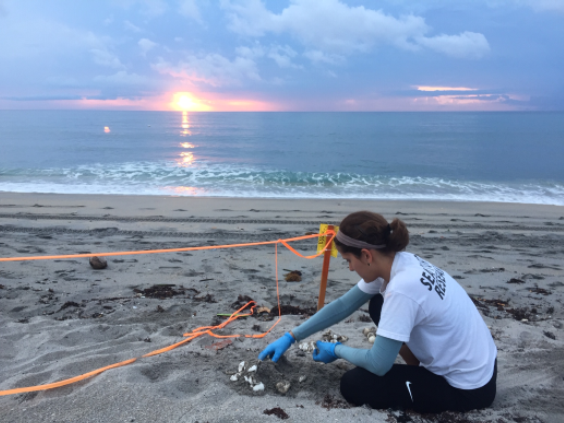 Boca Raton‘s beaches see hundreds of sea turtle nests every summer during sea turtle nesting season (March 1 to October 31).  Each of these nests might have up to a hundred eggs inside.  After they hatch, the hatchlings race to the ocean where they will swim upwards of 20 miles offshore to reach floating patches of sargassum seaweed.  However, not all of these hatchlings will make it that far, and some might not even make it off the beach or even out of their nests.

Gumbo Limbo’s Sea Turtle Conservation team monitors every nest on Boca’s beaches and excavates and inventories each one after they hatch.  Oftentimes, they find live hatchlings trapped at the bottom.  These turtles, along with others that may have been found wandering and exhausted on the beach, are placed in buckets and kept in a temperature-controlled room where the hatchlings can rest and get their strength back.  That same night, the hatchlings are given a second chance and released along the beach where most of them quickly scramble into the water to begin their journey.

Occasionally, some of them will still be too weak to swim or crawl to the ocean.  These hatchlings are brought back to Gumbo Limbo again and are admitted into our Sea Turtle Rehabilitation Facility.  There they will be given fluids and if necessary, a floating hammock to prevent drowning.  These hatchlings, or “swimmers”, will stay with us for weeks (or even months) until they are strong enough to be taken by boat and released offshore into patches of sargassum algae, right where they need to be.

There are many ways for people to help these hatchlings; one of which is to avoid the use of bright lights on the beach at night to avoid disorienting a hatchling.  Other ways to help include always leaving the beach as you found it when you visit, such as filling in any holes you dig, knocking down any sandcastles you build, or picking up any garbage that you might create.  It is very easy for a hatchling to become trapped in a deep hole, get lost in the labyrinth of a sand castle, or become trapped or entangled in garbage strewn across the beach.

If you ever find a hatchling wandering along the beach at night towards the ocean, it is always best to leave that hatchling alone and let it continue its journey.  However, if you ever find a hatchling wandering along the beach during the day, we recommend bringing that hatchling to Gumbo Limbo and placing it in to our Hatchling Drop Off Box located next to the front entrance of the Nature Center.  This box is checked frequently, and all hatchlings are checked out and cared for according to their individual needs.  Gumbo Limbo Nature Center admits thousands of sea turtle hatchlings every year, and in 2018 alone, over 8,000 hatchlings were admitted to and successfully released from Gumbo Limbo, because every hatchling deserves a second chance.