A Film by WLRN

Don’t miss the premiere broadcast on WLRN-TV on Thursday, October 3rd at 9:00 PM.

Gumbo Limbo Nature Center is proud to be featured in the new film by WLRN, “Troubled Waters: A Turtle’s Tale”.  Director Rory Fielding visited Gumbo Limbo in early 2018 to learn about the sea turtle gender determination research being done by Florida Atlantic University.  He learned that there was so much more to the story!  The resulting one-hour film, narrated by Peter Coyote and featuring Ted Danson, explores the effects of global warming, sea level rise, and pollution, and its profound impact on sea turtles and our oceans at large.


A note from WLRN about the broadcast.

For now, the broadcast is only on WLRN.  It may air on other PBS stations after it is released for national distribution in 2020.  WLRN’s signal, while it covers Key West to Broward thoroughly, it does not cover all of Palm Beach County.  For now, the best thing to do is to look for our call letters (WLRN) via the remote and/or cable guide on TV.  They are carried both on the lower channels in standard definition and also in HD on a higher channel numbers.  Audiences can also get WLRN via rabbit ears as far as West Palm Beach.

Until it goes out nationally, here are the ways to view the film after the premiere broadcast. 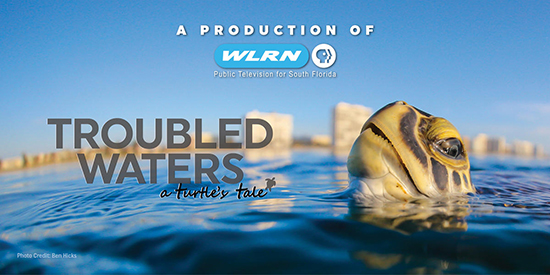