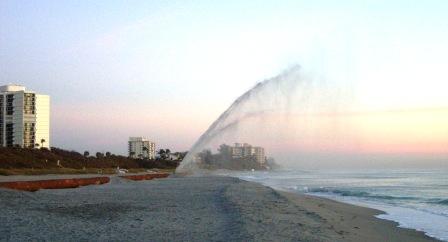 In addition to daily beach surveys, the Sea Turtle Conservation Program is kept busy with beachfront development and lighting issues.  Every year, thousands of hatchlings are killed when they become disoriented by lights visible from the beach.  Scientists believe that the baby sea turtles instinctively travel towards the brightest horizon, as the dark, tree covered dunes are starkly contrasted with the reflective glow of the ocean.  In fact, the hatchlings are so strongly attracted to light that they have been known to walk straight into bonfires left burning on the beach, undeterred by the heat of the flames.

Boca Raton is one of the first municipalities to institute a lighting ordinance (beginning in 1986); modernized slightly, it has been used as a model for many other cities in Florida, including Deerfield Beach and Pompano Beach.  Boca Raton was the first city to install a new type of turtle friendly lighting that has eliminated disorientations while receiving strong public support.  In a  stretch of A1A, to the north and south of Spanish River Blvd, a series of LED (light-emitting diodes) markers have been used to light the road at night, while the overhead streetlights remain turned off.  If this project is expanded in the future, it has the potential to drastically reduce local “sky glow” caused by high density development.